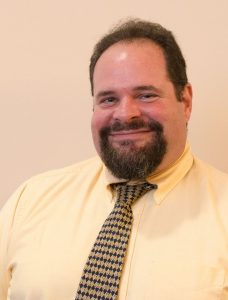 Anthony Fratello was born in 1972 in Long Beach, California, where his family was a member of Temple Beth David, a Reform congregation in Westminster. In addition, he was active in BBYO (The B’nai Birth Youth Organization).

Rabbi Fratello graduated from Pomona College in 1994, with a Bachelor of Arts Degree in History, and in the summer of 1994, began his studies toward the Rabbinate at the Jerusalem Campus of the Hebrew Union College. He returned to the United States to continue his studies at the Cincinnati campus of HUC-JIR (Hebrew Union College-Jewish Institute of Religion) in 1995.

While in seminary, Rabbi Fratello served pulpits in Mississippi, Indiana, and Illinois, and a Summer Residency at Temple Har Sinai in Baltimore, Maryland. In the service of these congregations, he had the honor of teaching and praying with Jews from all age groups, movements, and walks of life. Rabbi Fratello earned his MAHL Degree (Master of Arts in Hebrew Letters) from the Hebrew Union College in 1998 and was ordained as a Rabbi in June 1999.

In April of 2000, Rabbi Fratello was elected to the pulpit of Temple Shaarei Shalom, in Boynton Beach, Florida. Since then, the Congregation has grown to over 450 families with more than 175 children in its religious school programs. He has served as the President and Treasurer of the Palm Beach County Board of Rabbis, a board member of the Mandel Jewish Community Center of the Palm Beaches, and a board member of the Friedman Commission for Jewish Education.

Rabbi Fratello is married to his Hebrew Union College classmate, Rabbi Joanna Tract. Rabbi Tract serves as Jewish Chaplain at JFK Hospital in Lantana, and Spiritual Care Coordinator at Palms West Hospital in Wellington. The couple has been blessed with two sons, Samson and Eli.